Trainer Alan King admitted it was “a strange feeling” to win the Grade Three bet365 Gold Cup with Potterman following a stewards’ enquiry.

"If you backed Enrilo, I think you want to be praying."

It was the 7-2 favourite Enrilo, trained by Paul Nicholls and ridden by Harry Skelton, crowned champion trainer and champion jockey respectively earlier in the afternoon, who finished first past the post by three-quarters of a length with a short-head back to the third.

However, after leading over the final fence, Enrilo drifted to his left interfering with the fast-finishing Kitty’s Light (9-1). The stewards concluded that Enrilo had interfered with Kitty’s Light and ruled that the finishing position of the two horses should be reversed. This meant that Potterman, who was not involved in the interference, was awarded the race as he got up on the inside to take second.

Today was not the first time the result has been decided in such circumstances in the extended three and a half mile contest, with Topsham Bay (1993), Docklands Express (1991) and The Dikler (1974) all awarded this race in the stewards’ room after interference took place on the run-in.

Winning trainer Alan King said: “I’ll be totally honest with you, I’ve only seen it live, so I’ve not seen a replay. If it was France I would have definitely got it but I wasn’t so sure here. Obviously I’m delighted to get it. It’s not quite the same but there we are – we are not going to complain about that.

“It is a strange feeling. I’ve not had this feeling before as we weren’t interfered with. It is a strange one. A lot of people said you would definitely get it and here we are.

“It is a hell of a run. He went home for a while after the Ladbrokes Trophy as he is not a winter horse. The plan was to give him a prep but then I ran out of time. I did stick him in a hurdle race at Taunton a couple of weeks ago and I thought that was too close so I have worked him hard at home.

“I’ve not seen James (Potter, joint owner) since the race and a few weeks ago he did mention possibly putting him in over in America for the American Grand National, which would be an option.

“That was only mentioned a month ago in passing and I’ve not thought any more about it. He is very much a top of the ground horse. I’ve had a runner in America before, Penny Bridge ran in the Virginia Gold Cup in my first year of training. We will just enjoy today though.”

Christian Williams, trainer of Kitty’s Light, said: “I think the best horse in the race has eventually finished second. It is tough to take but I’m very proud of the horse and Jack (Tudor, jockey). We will try and put the disappointment behind us. Cap Du Nord ran an absolute blinder and Nick (Scholfield) gave him a great ride so the future is looking good.

“Kitty’s Light only ran in a hurdle race for the first time in July last year. When he finished third in the Badger Beer I think he would have won that race had he not been impeded then the plan then was the bet365.

“We gave him a nice break and ran him in two all-weather bumpers and he ran well then we thought it was important to get his head in front before this race which we did at Kelso. He turned up here in good form and we thought we couldn’t get him any better. It was a shame but I don’t want to be to downbeat as it was great to be involved in the race.

“It was great to be in a finish with Paul Nicholls and Alan King, who are my two biggest supporters. It looks like he could be a Ladbrokes Trophy horse. He seems like he is good over extreme distances. I do think his jumping is getting sharper. We will see what he does over the summer but it doesn’t look like we have got to the bottom of him. He could be a Grand National horse the way the fences are now.”

Paul Nicholls, trainer of the Enrilo, said: “I haven’t seen the head-on but it was a bit of a strange one in the fact that the horse who never would have won, won the race.

“I can see we got put behind the one we caused interference with. I haven’t seen the head on, but he’s a big green horse who when he gets in front idles a bit, but as Harry said when they actually came to him he won going away and the best horse won the race.

“It’s a bit of a strange result really, but it’s just frustrating because the best horse in the race by miles didn’t win the race. He was unlucky that he made a huge mistake at the second last and still got back up and just like at Newbury he just ran a bit green and a bit open. He did cause him some interference, but would that horse he interfered with have definitely won the race?

“I don’t know. I thought straight away after watching on my phone that he’d keep it – even though he’s caused interference – and that’s what I said to the owners.

“Harry rode him brilliantly and one I said is to try not to be in front too soon because he doesn’t do much in front and he is green but he couldn’t stop him getting there because he travelled extremely well and stayed on well.

“Even after that interference he was just being green, he wasn’t tired as he’s picked up and galloped on again. Harry’s done everything right but he did cause interference I suppose and they’ve put him behind that. Let’s regroup tomorrow and have a little look and get an expert to have a little look at it and if there’s grounds for appeal we might, but I want to see it all first.

“He’s awesome – he’s only seven and he’s a proper horse. He’s just green in front. I thought about putting cheekpieces on him today but I thought if I did that he’d over-travel and he’s done that anyways. He just travels really well and then idles a bit in-front, so it’s frustrating.

“It’s a bit harsh for me to comment too much as I haven’t seen the head-on, but my first impression was that we’d just about keep it and McCoy agreed with me, but what the stewards have interpreted I haven’t seen, so we’ll have a look.

“Nevertheless he’s run really well and what will the handicapper do with that?! I’d suspect you’d be looking at something like the Ladbrokes Trophy with him in the autumn, but an unfortunate incident.” 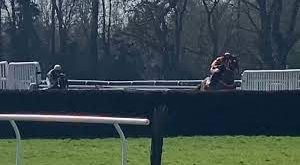 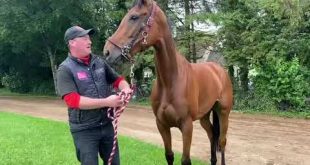