The trainer said he is now looking forward to “a big, big future” for the six year old, who has won three times and finished second twice in his five runs this season.

He told Racing TV: “I have to say that it was a bit of a shock for him to win. On autumn form, yes, he could win, but it’s a long way back to here from what happened at Kelso, where he got beaten at a short price. He was beaten after two jumps that day, but we redid his soft palate, put a tongue strap on and took the hood off, and we changed the tactics as well.

A pleasant surprise for @DSkeltonRacing to see Protektorat return to winning ways with Grade One success in the Manifesto Novices' Chase at @AintreeRaces pic.twitter.com/B94ejEDHZL

“Everything had to change. If you keep doing the same thing you’ll only get the same result. Perhaps he’s getting a little more experienced and he’s relaxing a little better. It was a surprise though. I thought he’d run well and maybe finish third or fourth.

“I honestly didn’t think what just happened there would happen. Ultimately he’s done it at a very high level and the form is very strong from that race.”

In a separate interview with media, Skelton added: “Harry gave him a great ride. I didn’t expect that to happen. I said to the owners, who also had Hitman in the race, today was a short term plan to get a long term result for next season.

“He is a credit to himself really as he won his first race in October. To be in training seven months and still win, it’s pretty good. If you do the same things you get the same result. You have got to mix things up a little.

“The hood was off, the tongue strap on we re-done his palate, we dropped him in a bit on bit better ground. You’ve got to experiment with younger horses as unless they are winning all the time you have to change things up.

“I learnt more in one run today than I have probably the whole season about him. That’s him done. The horse that he was this autumn is the horse that you saw today.”

Asked how surprised he was by the win, Skelton added: “It was possible on the autumn form but the Kelso run just made us all very nervous coming into it. I don’t think he wants to go right-handed and he hated it at Wincanton but that might have been his wind.

“I had in my mind we would start him off next season in the Old Roan but maybe we will see what the ground is like and go straight for something like the Charlie Hall.”

Jockey Harry Skelton added: “He was very good today, and that was a great way to start the meeting. Dan was just saying, he’s probably never thought as much about a horse as he has Protektorat this year. He’s a horse we always knew had a hell of a lot of ability, but he hasn’t been the easiest in his mind.

“He has had his wind issues and the last day at Kelso just didn’t happen for him, but he’s undergone a wind operation since then and he’s come right today. He’s a good horse on his day and hopefully things will fall into place for him now.”

Part-owner Ferguson was at Aintree to see his horse win and the jockey added: “It’s brilliant to have owners back. I can’t thank all the owners enough, and I’m sure I speak on behalf of Dan as well – they’ve been so patient through this difficult period, they’ve stuck by us and it’s great to have them back today.

“Well done to Aintree Racecourse, and I’m sure everyone is trying their best; hopefully they are here to stay now.

“This win means I am level with Brian Hughes in the jockeys’ championship, and it’s going to be a fight to the end. I’m really enjoying it. It’s what it’s about and where I have always wanted to be. The horses are flying and it’s a credit to our team. I’ve got four rides today, four tomorrow and six on Saturday, and hopefully they will run well.”

Ferguson also part-owns Hitman, who finished third. Trainer Paul Nicholls said: “I thought he was going to win going to the last, but he’s still weak and probably wants another year.”

Jockey Harry Cobden added: “He ran well. He jumped okay and did everything right, but he probably just wasn’t good enough on the day.”

The Shunter, trained by Emmet Mullins and running in his new colours of JP McManus, finished second. 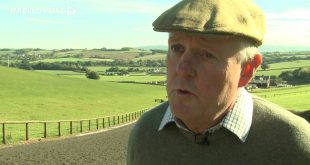 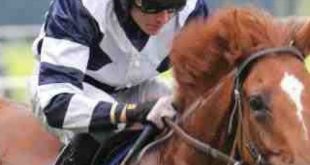 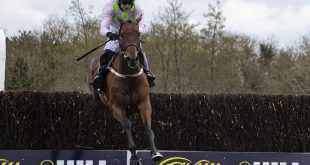 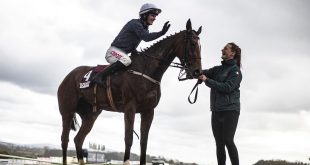